Every Picture Tells a Story

Most of my images are static, not dynamic. The difference between an image of a mountain and one from a football game. But sometimes you get lucky and can combine the two.

The happy camper on the right was playing ball with Freddy. Tossing it in the water. Hoping he would bring it back to her. He usually did.

Her mom and younger brother and sister came by on a paddle boat just as Freddy was jumping up on the dock.

Their waving dissolved into laughter as Freddy ran up and did a big wet shake next to her while she tried to duck the deluge. 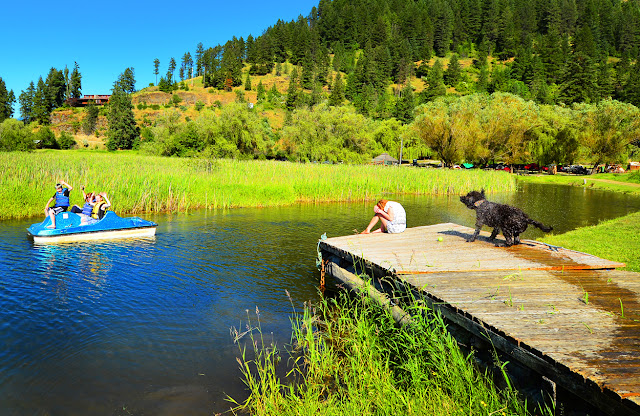 But what he does do is keep an eye on the boaters to make sure they are safe. 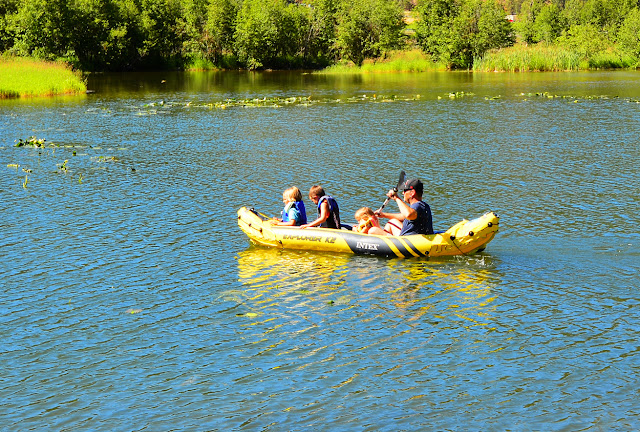 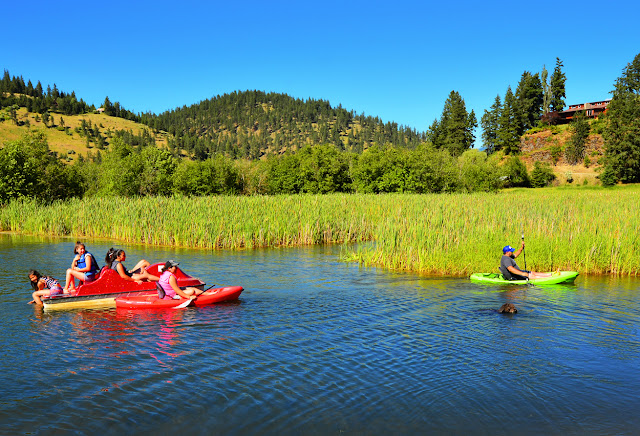 He got a little nervous with the kids hanging of the side of a paddle boat. 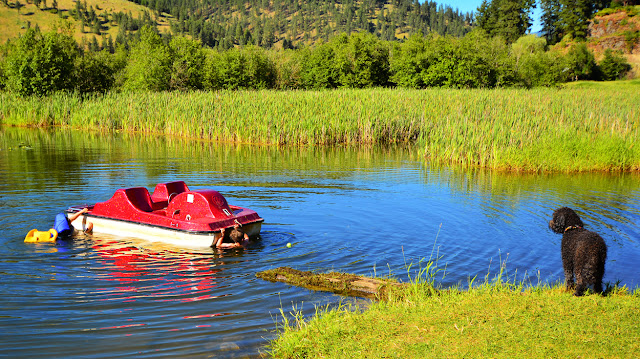 Or it could have been the fact that his ball was right next to them.

Either way he was always appreciated.

With the usually calm water next to the campground, the reflections are cool. The slight bow wave in the first photo below resulted in a fun house mirror effect on a pair of hands. 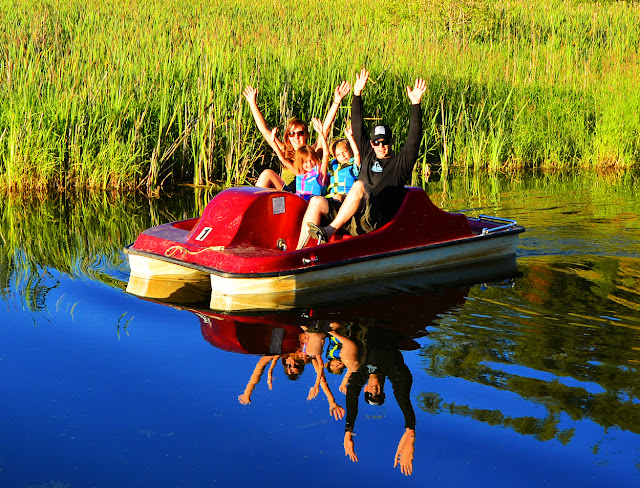 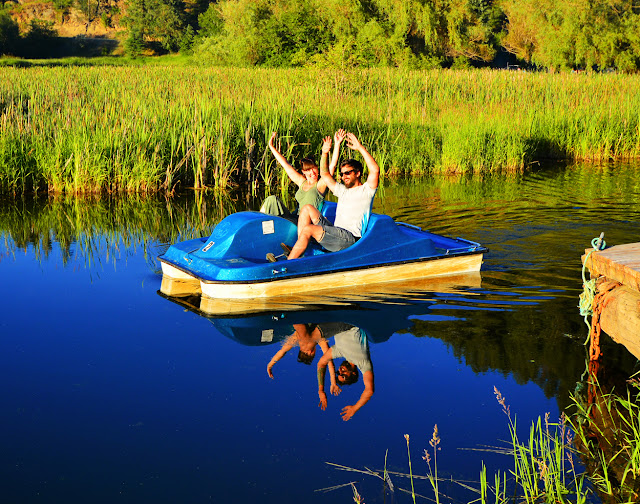 I have seen some fish caught off the point. Bass, catfish, even a pike. But dogfish are rare. It takes the right bait and the right presentation and retrieval. They will pop up from the deep water and swim on the surface, charging your offering. Squeaky balls seem to work best. 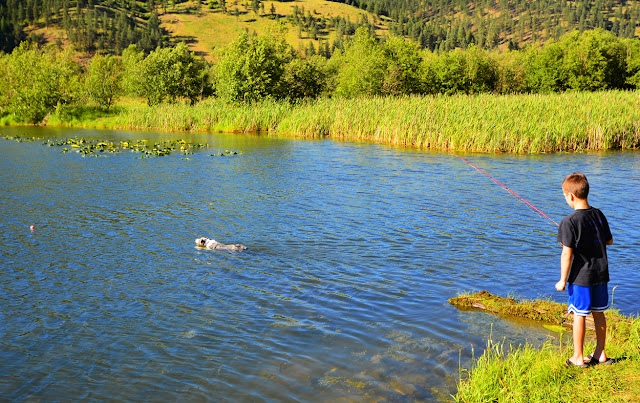 It was another great week. The RV section was mostly full, the cabins stuffed with fun families, and the tenters were enjoying one of the nicest tent areas I have seen. 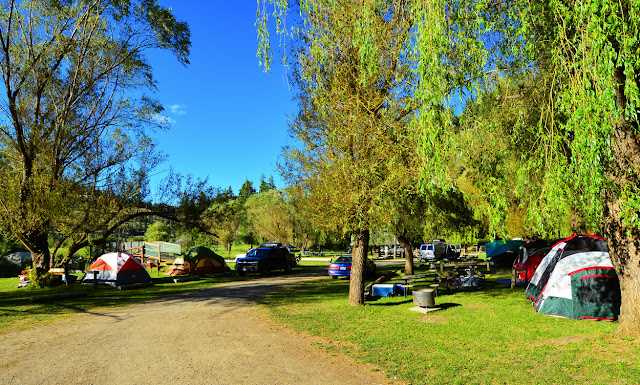 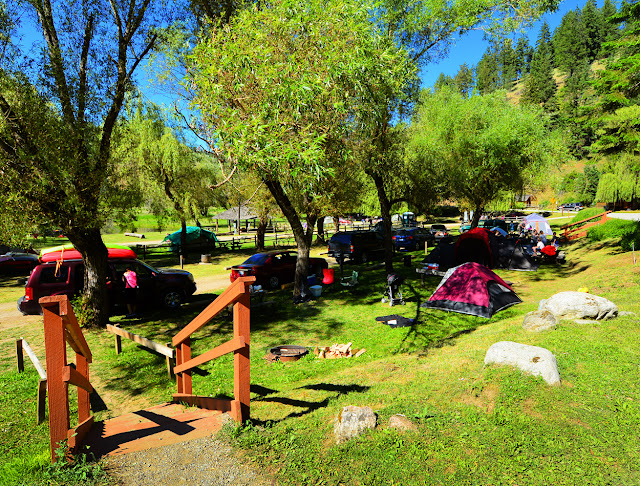 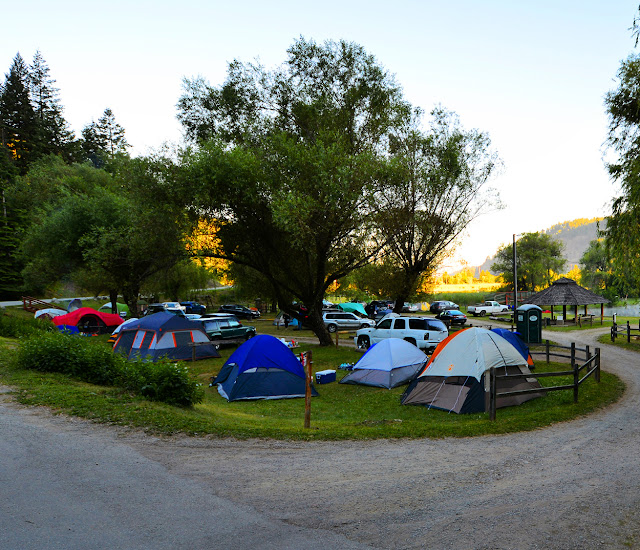 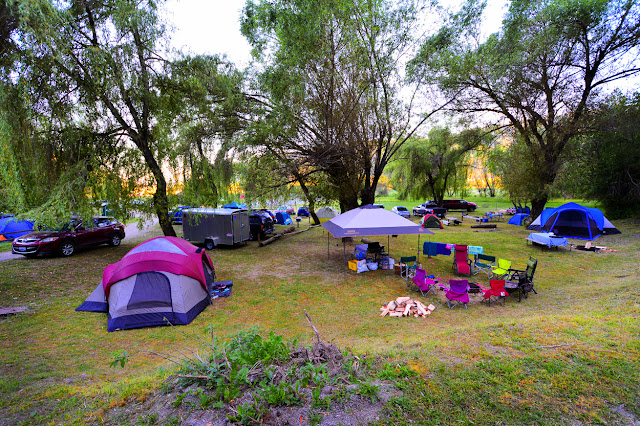 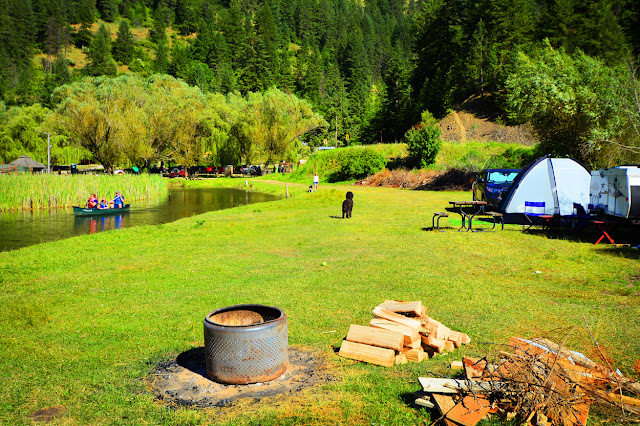 Back to the RV sites. I have shown photos of the cabins and tent area in recent blogs but not examples of the three types of sites we offer for the hard sided crowd. 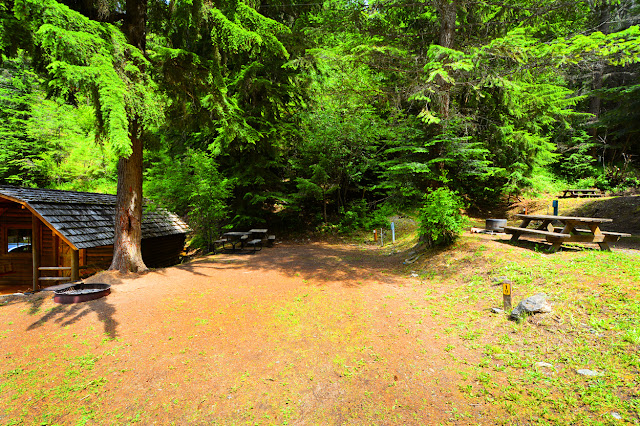 Adding a sewer connection bumps the price to $44. 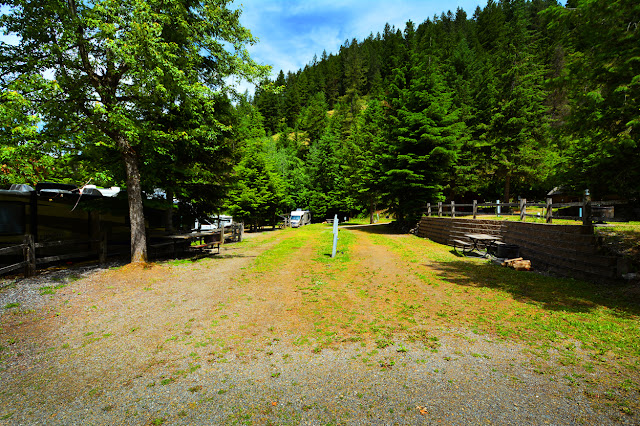 Depending on how much of our free firewood you burn, you can effectively knock 10 to 20 bucks off the actual cost per night. Add in the free boats and wifi, well, it's a very fair price.

Plus don't forget we offer a free camp portrait as well. Done by yours truly. Just ask at the office or look for Freddy walking around around the campground dragging his owner and give us a holler.

And if you are by yourself, Freddy will be happy to pose with you. 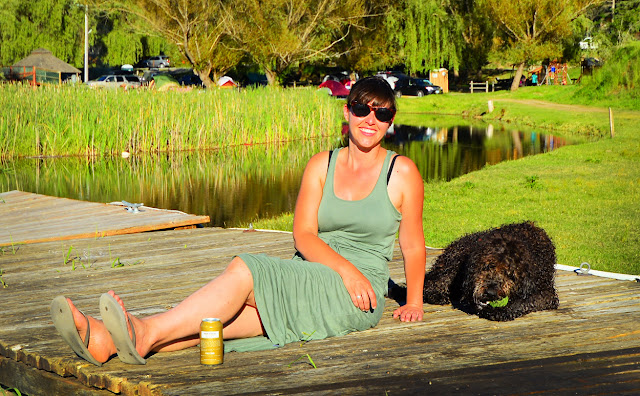 Or if your boyfriend shows up, he will graciously leave. 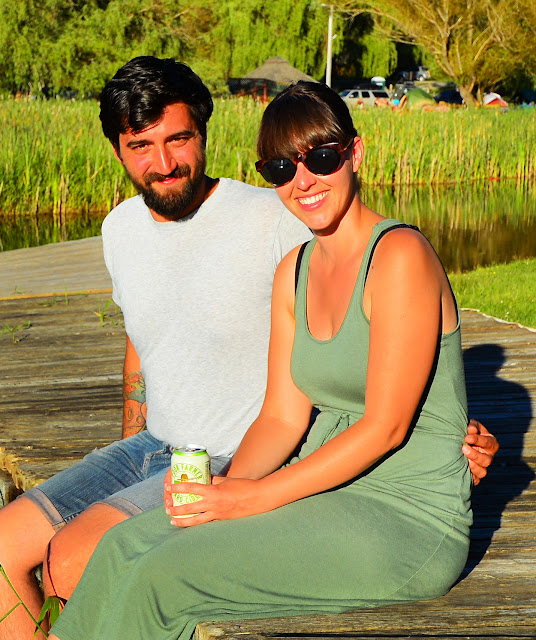 He is a good dog.

Camp Coeur d'Alene is a destination campground and with our store and pool opening soon, there is no reason to leave during your stay.

But if you want to go for a drive, well, we got it covered. When you turn in to our campground, you just left the Lake Coeur d'Alene Scenic Byway. 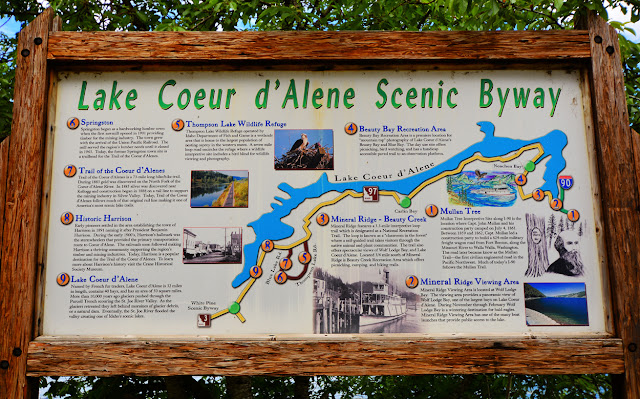 We are located next to the second orange dot on the right. This sign is just across from the camp entrance.

The fourth dot from the right is Beauty Bay, just a few miles from here, and there is a neat road that follows Beauty Creek. There are several places where you can pull off for a secluded picnic. 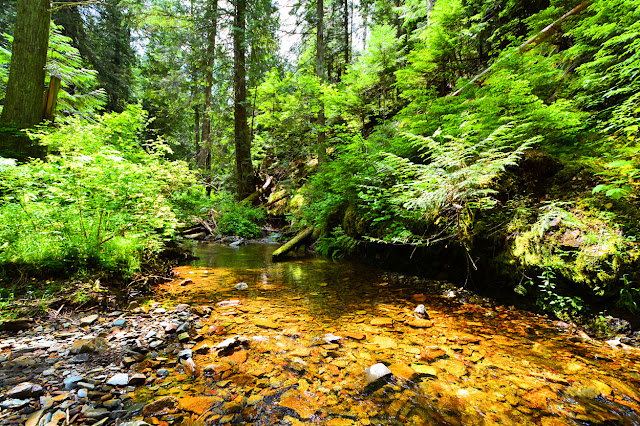 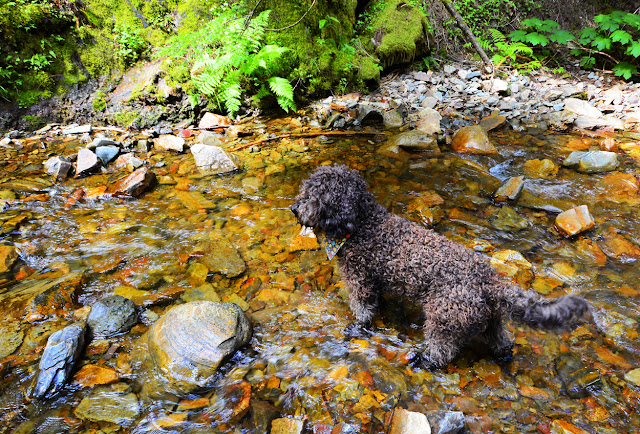 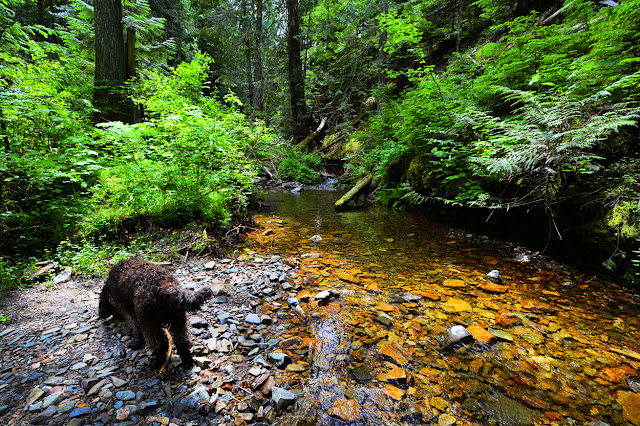 I plan on doing some more exploring locally to see what I can find.

Freddy has been waiting patiently for me to finish writing this post. 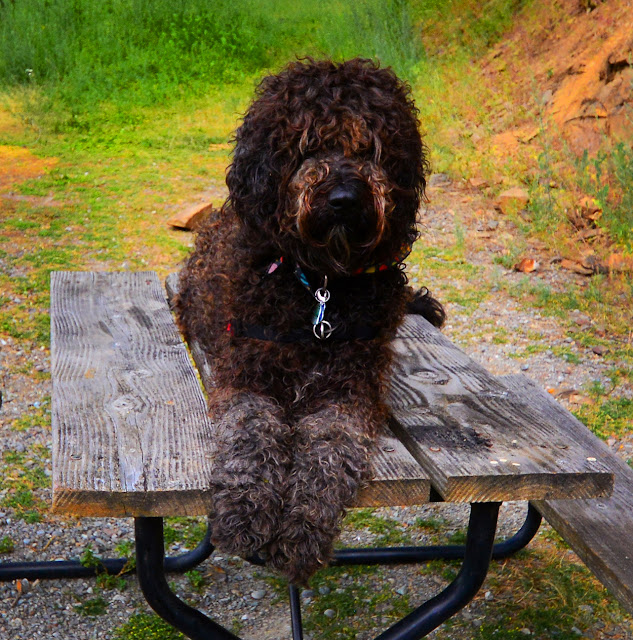 He wants to go swimming and play ball. At his favorite spot. 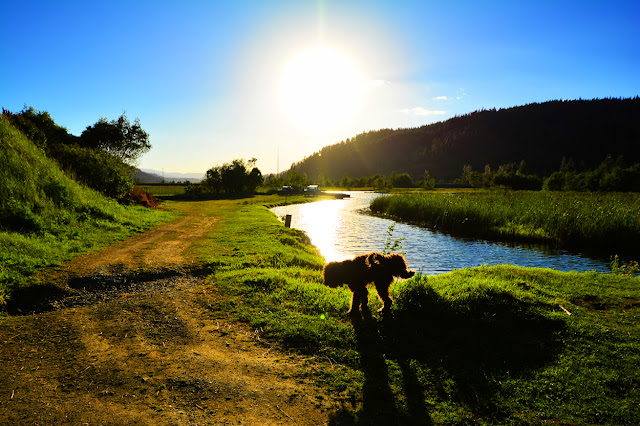 So here are two last pics followed by the latest photo tip. 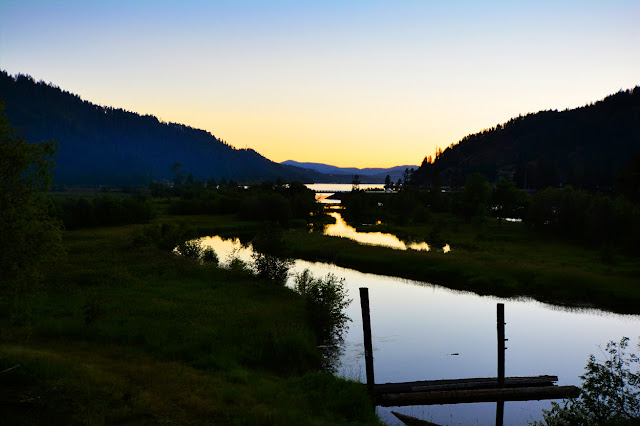 One week from today is the fourth of July. Coeur d'Alene is putting on the biggest fireworks show in the area just shy of 10 pm.

Fireworks are simple and fun to to capture on your camera. The best part is just being there and having a good time. But if you want to bring those memories home with you, here is how I do it.


A tripod is a must unless you can remain perfectly still for two seconds. And no, you can’t. Get comfortable on your blanket or chair and set up the camera on the tripod right in front of you so it is easily reached. Set it to manual and dial in a shutter speed of two seconds at F/14 and ISO 100. Set the focus to infinity.

Next you need to frame the shot. Loosen the head on your tripod so the camera can rotate freely. Watch where the first few fireworks explode and set the zoom and camera angle and then clamp everything down. Leave yourself some room around the edges of the frame because the finales usually involve multiple launches and you don’t want to cut them out of the picture.

Now the fun part. Timing. You will eventually get into a rhythm. You will hear the thump of the launch followed a few seconds later by the burst. You have a two second window for the explosion once you press the shutter button. You will be saying “Nailed that one” or “#%&@”.

Here are two examples from on . 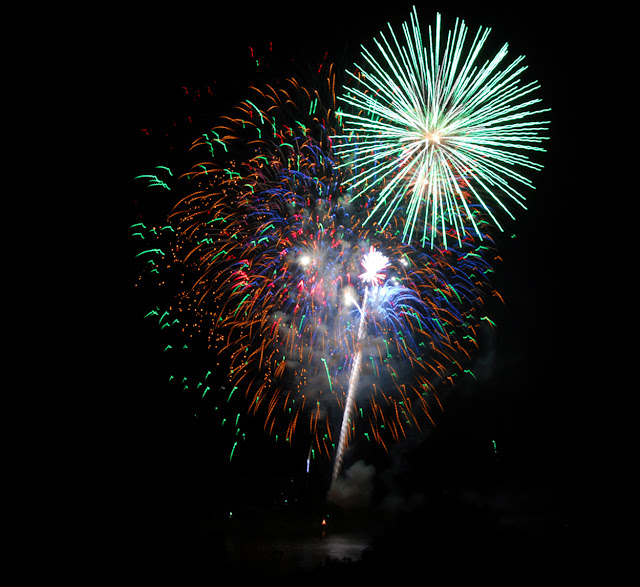 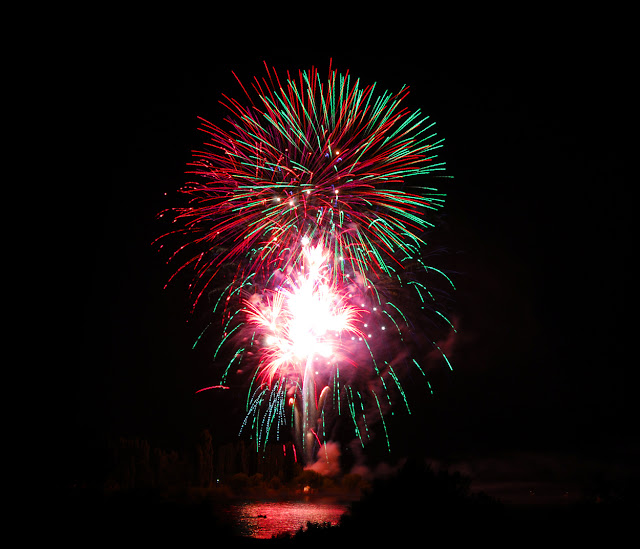 There you have it. Easy as pie. Should be some nice reflections on the lake as well.

Hang on a sec. Freddy is tugging on my sleeve

"Post that picture of me that I like.You know, the one with the ball and the bright thing behind me." 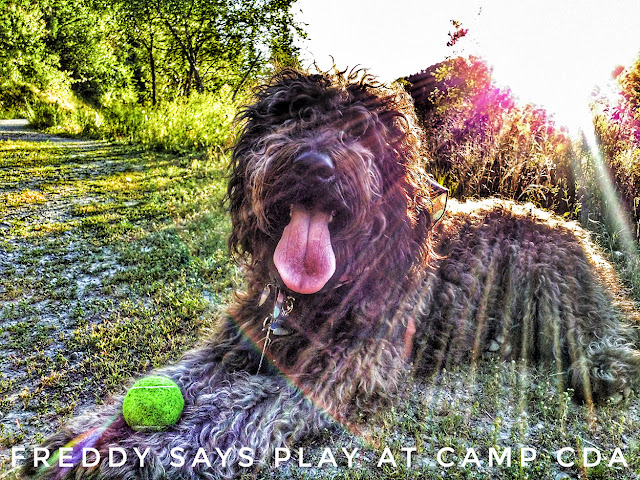 He thinks he might have a career in advertising.

Regards,
Greg and Freddy and the wonderful staff at Camp Coeur d'Alene
Posted by Greg Wood at 4:59 PM